The Historic Hillsborough River Commons is a 2014 legacy project. This development was made possible with the partnership of the City of Charlottetown, the Department of Canadian Heritage, PEI 2014 Inc., Downtown …… 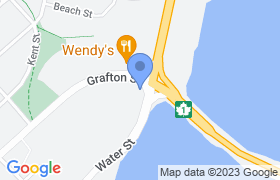 With a project budget of approximately $650,000 the development included a new “City of Charlottetown” sign, two feature walls with interpretative panels, a new piece of public art, flag poles, benches, new pedestrian pathway, trees and landscaping. The new Charlottetown sign features the “birthplace of confederation” slogan on a black and red granite face. Color changing LED lighting illuminates the sign at night and catch people’s eyes. Flanking the new sign on both sides are the two feature walls. These walls have beautiful brick work and are filled with 1864 themed interpretative panels in three languages, English, French and Mi’kmaq. $100,000 of the project budget was dedicated to a new piece of public art. A national open competition was held where artists put forward their interpretation of the meaning of the 1864 meeting. The art is located on the Water Street side of the project area and will be very visible, unique and eye catching to both vehicles and the walking public.

Flag poles for all the provinces and territories are erected along with a new pedestrian pathway that connects the waterfront boardwalk to the Confederation trail. The project was finished off with new benches, significant tree planting and beautiful landscaping.