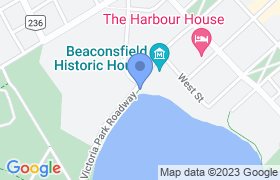 The Victoria Park Boardwalk Redevelopment project proposed to replace the 20 year old Victoria Park Boardwalk that stretches 1.25km along the water’s edge. The aging infrastructure sees substantial use by the general public and visitors alike and was beginning to show its age. There was also a desire to engineer the new boardwalk to handle large snow clearing equipment during the winter months. This project was highly visible and very popular amongst the citizens of Charlottetown.

This project was completed by a single contractor who handled all elements of the new boardwalk. As for the specific stages of the project, the boardwalk was done in a train like fashion. On the front end, crews lifted the existing boardwalk, then the base was prepared, new boardwalk constructed and the finished product comes out the back end. This continued for the whole length of the new boardwalk.

As for the materials used, the new boardwalk was upgraded to marine grade, Eastern hemlock, rough sawn timbers. The size of the boards was substantially increased along with the base below. The gravel below the boardwalk was increased from 4″ to 10″and weeping tile was added to allow any moisture to escape if it finds its way in. The sleepers are now 4″x 8″ in size and there are 6 of them across the width of the boardwalk. The decking is now 3″x 6″ in size and the width went from 8′ to 10′. The City of Charlottetown can now feel confident in driving large snow clearing machinery on the boardwalk. With this upgrade, the future of the Victoria Park Boardwalk has been secured for the next 25-50 years. The response from the public has been overwhelmingly positive. This project carried a cost of approximately $750,000.