The streetscape on Queen Street is an extension to the streetscape developed on Victoria Row in 1998. Along with the beautiful brick pavers, all overhead… 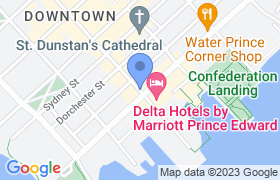 The streetscape on Queen Street is an extension to the streetscape developed on Victoria Row in 1998. Along with the beautiful brick pavers, all overhead electrical, telephone and cable were placed underground. While this work was being completed, some improvements to the sewer and water systems on the Street were done as well.

The sidewalks were changed from a concrete surface to an interlocking brick similar to the brick surface on Victoria Row. Parking spaces were also upgraded from asphalt to interlocking brick with generous tuning radius at the intersecting street corners. Provision for more street trees and landscaping between each block were also included in the work. Lighting along the street was improved with the installation of traditional Charlottetown light fixtures at all corners and between each block.

Barrier free parking spaces were specified at each corner with all curbs ramped to allow for easy wheel chair access to the sidewalk and designated parking areas. Street furnishings such as benches, signage and garbage receptacles line the street along with generous annual flower planting areas at and between street corners.

Construction began in the month of September and we completed in mid-December. This project was made possible through the help of its partners, ACOA, the Province of PEI, the City of Charlottetown and CADC. CADC completed the streetscape drawings and also project managed the construction process. This project had a cost of approximately $1 million including the upgrades to the storm sewer and electrical lines.