Completed in the summer of 1995 the Confederation Landing Park is now a jewel on the Charlottetown waterfront. The park is 6 acres and cost $1.7 million…. 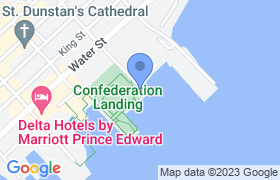 Completed in the summer of 1995 the Confederation Landing Park is now a jewel on the Charlottetown waterfront. The park is 6 acres and cost $1.7 million to construct. Built on a former Texaco tank farm the area has had a complete transformation. After a national design competition, the project was awarded to a design team led by the Ontario landscape architectural firm of Hough Stansbury and Woodland Limited. The park is located at the same location where on Sept 1, 1864 the eight-member fathers of confederation, including John A. MacDonald, arrived.  Sponsored by the Charlottetown Area Development Corporation, the plan to boost local tourism included a new cruise ship doc, .45 km of boardwalk promenade, a skating oval, a covered bandstand area and a garden square. The park has created a year-round centre for the enjoyment and enlightenment of both residents and visitors alike. This project was completed during a period of extensive waterfront development that saw Peakes Wharf, Confederation Landing Park, the CN Brass Shop and the CN passenger station all redeveloped.

Along with the park construction, a large 170 vehicle surface parking lot was also developed. This parking lot serves as the as the stopping point for many visitors to the Charlottetown waterfront. The hard surface lot also comes in handy during the many festivals and events which are held in the area.