The Charlottetown Area Development Corporation in partnership with the Province of Prince Edward Island and the Government of Canada, through the build Canada fund, have designed, constructed and will operate a permanent venue site…. 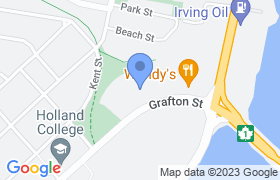 The Charlottetown Area Development Corporation in partnership with the Province of Prince Edward Island and the Government of Canada, through the build Canada fund, have designed, constructed and will operate a permanent venue site and parking facility capable of hosting a variety of outdoor festivals and events.

The venue site, which is located in the east end of Charlottetown, is on lands formerly owned by Imperial Oil. The site is bisected into two parts by Grafton Street and has Water Street Parkway running along its Southern side.

Land use on the site has historically been land fill, rail transportation, fuel storage and as an electrical transmission corridor. Rail transportation was abandoned on P.E.I. in the mid 1980’s with the removal of track and associated signaling along the rail corridor. Electric power transmission lines still remained but in 2002 all fuel storage tanks were removed along with the associated service pipelines, filler tracks and some hard surface paving materials.

The new parking area on the North side of Grafton will be connected to the existing asphalt parking lot off Park Street, used by the Charlottetown Civic Centre. The new parking facility will have space for 543 vehicles, 12 buses and will be utilized by Holland College and local businesses on a daily basis. This new parking facility will be outfitted with energy efficient LED lighting and entrance gates to control parking during the various events.

Site development on the main concert site consists of the importation of approximately 40,000 cubic meters of fill, topsoil, aggregate and asphalt to bring the venue site up to its current grade level. The addition of energy efficient LED lighting will allow the site to be both beautiful and efficient. Still to be completed in the spring of 2013 is the planting of hundreds of Acadian forest trees which will fill the embankments along Water and Grafton Street. The main lawn area is 3.5 acres and can accommodate upwards of 20,000 – 25,000 people. The site has power and water delivered to various strategic areas of the site to accommodate the widest possible range of events and uses including the PEI International Shell Fish Festival and the PEI Fall Flavors Festival. Provisions have also been put in place to accommodate snow making equipment for the Jack Frost Children’s Winter Fest.

The Charlottetown Event Grounds will serve as a great addition to PEI’s tourism infrastructure. The site will be enjoyed by locals and visitors to the Island alike. These grounds will provide lasting benefits for many generations to come and is something that Charlottetown and all of PEI can be proud of.